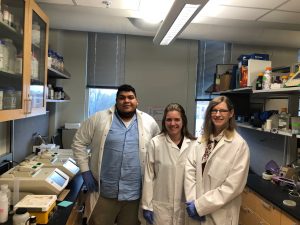 Hello, my name is Enrique Garcia.  I am a graduate student at NC State University in the Interdisciplinary Biochemistry Masters Program (IBMP). So far, my experience at NC State has been amazing. Coming from Catawba College, a much smaller undergraduate institution, I was afraid that I would be overwhelmed by a large, prestigious university like NCSU, but to my surprise it was an easy transition. With so many great resources at my disposal and great professors always willing to help, it’s no wonder that my experience here has been great. I am extremely happy to be where I am now. Thanks to the interdisciplinary aspect of this program, I can apply what I learn in my core Biochemistry courses to my research in Dr. Amy Grunden’s lab in the Plant and Microbial Biology Department. I am currently working on developing a fusion of two enzymes, OleT and Superoxide reductase (SOR). The idea is that OleT catalyzes reactions that convert fatty acids chains into hydrocarbons that can be used as biofuels. SOR is fused to OleT to provide a constant influx of hydrogen peroxide to keep this reaction going at full capacity. Being in this lab has helped me solidify myself as a researcher because I am learning techniques that I had never used before. Also, the environment here is much like it is around campus; its hospitable and helpful!

In an interview, Dr. Grunden and Ph.D. student Hannah Wapshott provided background on Enrique’s project. According to Dr. Grunden, “ In my lab, we do a lot of work using microbial enzymes for biotechnological applications. Specifically, we work on enzymes from extremophiles.” Extremophiles are microbes that thrive in very diverse and hostile environments such as high temperature, low temperature, high salt, or high and low pH environments. “We can use these organisms to develop better biofuel systems. One thing that we are looking at is using halophilic algae that do a really good job of converting carbon dioxide from the air into lipids and fatty acids, but it turns out that in that process of converting lipids and fatty acids into biofuels you have to use an expensive thermal-chemical process that requires a metal catalyst like palladium. This represents a very big expense in the 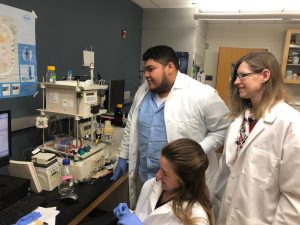 Admiring the chromatogram from one of Hannah’s protein purifications on the FPLC.

conversion process, but there are enzymes, such as OleT, that can do this conversion process without a metal catalyst. However, this process does require an oxidizing agent like hydrogen peroxide. Our idea is to use SOR to feed hydrogen peroxide to OleT directly, circumventing the need to add exogenous hydrogen peroxide, which is harmful to cells and enzymes.”  Hannah’s Ph.D. project has been working on the OleT reaction. Enrique’s project is to clone, express, purify and characterize  fusion proteins of OleT with SOR. According to Hannah, “SOR has the potential not only to help OleT catalyze the conversion of fatty acids to biofuels, but can also help protect the algae from stress,” as has been shown in some cyano-bacteria.

About the IBMP Interested in IBMP? Check out our new video